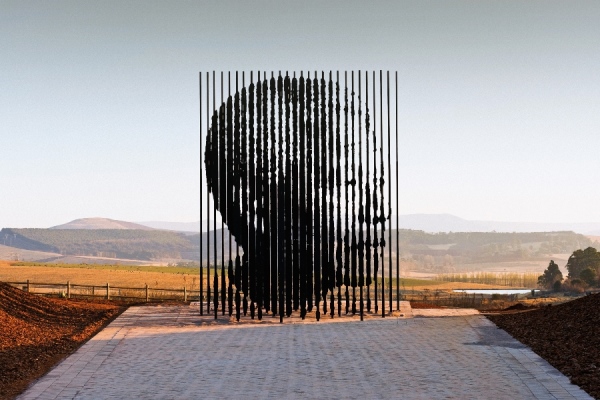 The Apartheid Museum opened in 2001 and is acknowledged as the pre-eminent museum in the world dealing with 20th century South Africa, at the heart of which is the apartheid story.

In 1995 the South African government set up a process for the granting of casino licenses, establishing an agency to do this called the Gambling Board. The bid documents stipulated that bidders should demonstrate how they would attract tourism and thereby grow the economy and stimulate job creation.

A consortium, called Akani Egoli (Gold Reef City), put in a bid that included the commitment to building a museum. Their bid was successful, the Gold Reef City Casino was built and an adjacent piece of land given for the construction of a museum.

The cost of the construction of what became the Apartheid Museum - approximately 80 million rand - was paid for by Gold Reef City.

The Apartheid Museum, the first of its kind, illustrates the rise and fall of apartheid.
To see the sculpture of Mandela, visit the Capture Site between Nottingham Road and Howick in KwaZulu-Natal. In 2012, to mark the 50th anniversary of Mandela's arrest, a sculpture was erected in the landscape near Howick in KwaZulu-Natal, where Mandela was captured in 1962. This site is now known as the Capture Site. The sculpture by artist Marco Cianfanelli consists of 50 steel poles between 6 metres and 10 metres high. At a certain point, the 50 linear vertical steel columns line up, magically recreating an image of Nelson Mandela's face.

As you walk closer towards and through the sculpture, the image dissolves back into the forest of 50 poles, and eloquently becomes part of the surrounding landscape. As Cianfanelli observes, "The 50 columns represent the 50 years since Nelson Mandela's capture, but they also suggest the idea of the many making the whole: of solidarity.

~Things To See and Do, Activities in South Africa~